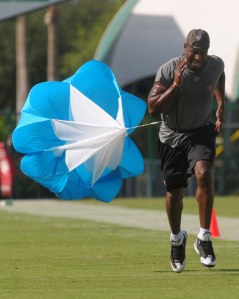 This may be a bit left field, but anybody who knows me understands that I am a very observant person. With that said, they won’t find it strange at all that this post was inspired by my daughter’s dog trying to eat some excedrin, that I dropped while I was in the kitchen. What I pulled from that simple act was that Rocky, my daughter Aiyana’s dog, could care less what it was that I dropped out of my hand.  The fact that Rocky is kept in a crate, and feeds and eats when we deem it proper to do so, is what I attribute to him reacting that way. Now, here is where I am going with this. I also observe people, and it is no question in my mind that some of us act this way in regards to a status or ideals when the opportunity presents itself.

My previous blog entry,  fantasy football as a possibility for your life, essentially dealt with a similar subject. In our culture it is widely accepted to hang on the every word and action of another human being. While some human beings are undoubtedly brilliant teachers and performers, I believe that it is a healthy balance that we must have in order to get mutual benefit from the relationship. I am assuming that is what we all want right? If we teeter too much on the side of worship then the relationship becomes one-sided and you find yourself behaving like my man Rocky. I have no intentions of slighting dogs, it is truly an admirable quality, but it is what separates us. We shouldn’t subscribe to worshiping the man and the opportunity to grasp what is in his hands, not without questioning it. I have always thought it wise to stay in touch with my core self and borrow certain philosophies, mindsets and ethics from others.

This I tell you is from personal experience. I have been smitten with others and have given them my blind trust; to no avail. Throughout the years I have learned that my fantasies about others or certain status has greatly exceeded what actually was realistic. It was being a fan of money, wealth, power, beauty, security and other ideals that led to a false attribution of a nearly divine status. It wasn’t until I became a student and an appreciator of the same qualities, that they were able to manifest in my own life.

On that note let me tell you what Cadillac Williams taught me. He taught me that when the world thinks you are down, it is your faith and determination that will bring you through the toughest times. Cadillac Williams came back from a Patellar Tendon injury in 2009 and it was his first game back. I remember it like yesterday because it was a very special moment in my life. He was tearing it up in the 1st quarter against the Dallas Cowboys. Our head coach, Raheem Morris, committed in the media to a 3 man rotation at our position of running Back. So, after Cadillac’s two series, it was supposed to be my turn. Coach Morris looked at me and asked me whether or not I was ready, in which I replied “No, I am good. Carnell is hot leave him in there”. This may sound dreamy, I don’t know or care, but I wanted to appreciate that moment. I viewed it as so insignificant to my single series in that single game. See, I chose not to be a fan of attention or obsess about tomorrow. I was very confident in my skills and value to the team. I chose at the moment to be a student of life instead.

Did you realize that thinking that you are competing against another man falls in this category? That to think someone else is your competition is in a way deifying them? This always diminishes yourself, as well as the object of your worship, because in the end it never measures up to your ideal.  My competition has always been the man I look at in the mirror. If I was to compete with someone else, I would in a sense be setting my own limitations. Not only on myself as an athlete, but also as a person because the potential of the relationship with your opposition becomes limited. You don’t believe me? When you fumble the ball, what does it have to do with the other person?  Think about it. Some of the greatest feats in life have come from men who are alone. Throughout the offseason, the media would talk about how Derrick Ward and Earnest Graham were going to be a powerful duo. To their dismay, Cadillac was back and ready for the season opener. If you don’t know a Patellar Tendon is an injury few come back from. While the world was feeding Cadillac the possibilities for his life, he chose to believe in himself and in my opinion found out more about who he was during his adversity, as opposed to his successes. He left a talented young man, but came back an experienced one, powered up by his grueling rehab and mining of his soul.  This is why I state that it’s no need to focus on the next man, things come to those who are prepared.  This is why I always made it a point to focus on my value, which allowed me to perfect all things. They tell you when you come into the league in a less than desirable manner, meaning undrafted, that you should not compete with the man next to you, but against everyone in the room. They were referring to the need to earn a spot on special teams, because starting was not likely. This was one of my first lessons about value as a professional. I chose to better myself and add skills as a special team ace to my resume. Trust me, many guys ignored that advice and tried to disprove the coaches theory. I have yet to see it work.

It is the humbling of myself, that at the same time empowered me to be strong enough to realize that this man was in my life for me to learn from, as is all others. See if it was two dogs in that kitchen, they would have darted at the same pill and possibly bitten each other for first dibs on what I dropped out of my hand. While I love our pets, it is a different love than I have for a human being. I GOT football, I can do that in my sleep as I was born to tote the rock. What Cadillac Williams did was special, and he did it twice. I am just happy that I got to experience it in the proper spirit.

I am Earnest Graham and I am more than a competitor. Far away from watching eyes I continue to better myself in preparation for all blessings. I thank God for those that I have borrowed from in the midst of a desire for the same thing.

Thank you and God Bless!!

Published by Mentality B4 Reality Sports

Mentality B4 Reality is a 501-C3 organization whose core mission is to promote unity within youth sports to further impact and define the youth in SWFL during the most integral periods of early childhood development. View all posts by Mentality B4 Reality Sports

7 thoughts on “What Cadillac Williams Taught Me: Determination Part 1”